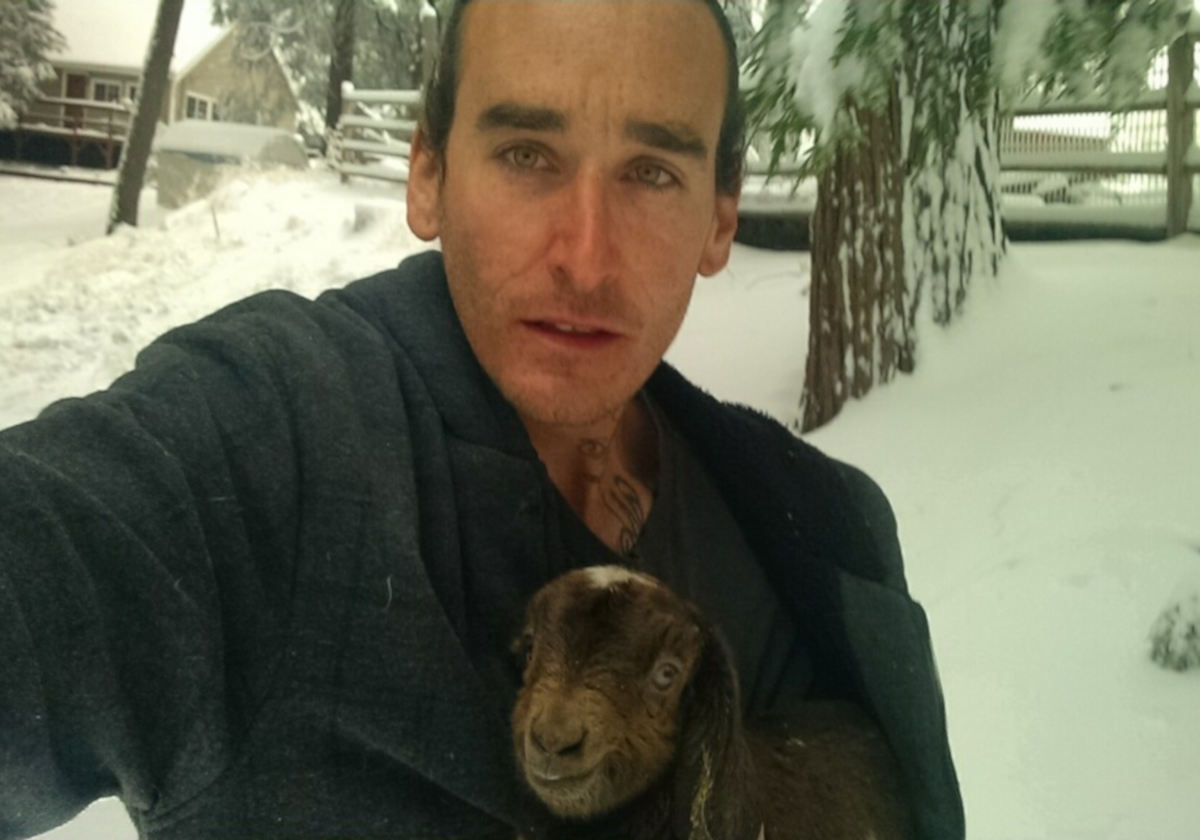 The morning of Shermans rescue started with our normal weekday routine. Jordan was off to work early and I had just finished doing breakfast for the animals and morning chores.

I had just down with Chance on the couch to get a couple more hours of sleep. I was just falling back asleep for a nap before work, when our roommate (home sick at the time) woke me up with a phone call from Jordan.

Immediately, I knew something was up as she knows my routine and would never wake me up unless she had too. She was calling me because a she had just gotten off the phone with the very same farm Chance came from.

This is a small backyard goat farm. And they had a newborn baby rejected by its mother that morning. They offered to let us come take him.

Immediately saying yes to an animal is something that is very rare for us. We always try to rescue responsibly and that usually involves a lengthly conversation with me, Jordan, and a bottle of wine… but this call was different and we both knew why.

Twice already that very same farm had called us about 2 other newborns in the last 6 weeks that had been rejected. Both times we had scrambled to get ready to make the 2 1/2 hour drive to the top of a mountain to get the babies and both times the calls came too late. The babies passed before we could even drive off our property.

We were not able to save those first two babies, but this baby was just born and we were gonna do everything we could to get there in time. The first babies were girls, farmers are usually less likely to give them up early. They are more profitable.

Having made this drive before to get Chance, I had some idea of what i might need to bring. So, I hopped up, hurried to the kitchen to sanitize bottles, prep formula, boil water, grab the first aid kit, blankets, towels, and everything I might need.

I think of nothing for myself, and I leave in the same clothes I had worn to work the night before ( shorts and a tshirt). The night before, San Diego had a huge storm throughout the entire county.

I knew the weather might delay me a little bit, but man was I really wrong. I drove down the mountain Farm Animal Refuge sits on and headed to Sherman… at the top of another mountain across town. This drive would normally be around 2 1/2 hours. So I assumed I would make it home in plenty of time to finish the afternnon chores and get ready for work.

My first sign that might not happen came when I was turned around going up the first mountain because the roads had been closed to all cars without chains. No problem… growing up in San Diego, I knew there was a similar route at a lower elevation, so I turned around and headed down the mountain to get to that road. I make it to the first little town on that road and find out it is the same story. My Honda Civic and I weren’t permitted on the road.

OK option 3, the scenic route, I start heading that way. I get a call from Jordan again. My heart immedately sank. When I answer, she says that the farmer called again and wondered how far I was. I had know idea… it could be another two hours. And now I’m nervous.

I hurried to the base of the mountain and started my way up the windy road. I could see as I was coming up that most of the mountain didnt have snow except for the top so I figured I was in the clear. Ascending, I was watching my GPS go in and out of signal. It said only a few miles up this road, so I knew it couldn’t be much further.

I drive up this road with a few cars in front of me. I start to see patches of white on the ground. Those patches become larger and larger until all i can see is snow covering everything.

The roads were still clear and GPS still said only a few miles. So I just let myself start enjoying the perfectly white snow covering these ancient pine trees. Then I realize, the road is taking me up elevation quickly. Now, not only is the snow on the ground getting thicker, but it starts to lighlty snow again.

I still have over a mile to the house and the road is getting worse and worse. It’s worried. Then I see the turnoff to the road that leads to the farm.

Boom. Right in the middle of the street is a big sign that says “Road Closed Resident Only”. I sit at the bottom of the road looking at the map on my screen. I am so close! There is no way I am leaving without this baby, so i slowly start making my way up the road.

The closer I got the the house the icier the road was getting. I was far from anywhere with a signal to call the farmer. After repeated attempts of trying to call, I decided the only way to get to the farm was to walk up the road and bring the baby down to my car.

I didn’t think it was a very good plan, but i was not leaving without him. Off into the snow I headed. I can’t imagine what the farmer must have thought seeing me walk up in shorts, a thin hoodie, and tennis shoes but that didn’t occur to me until later.

I was greeted outside and taken to their laundry room where they had put him. I heard his cries from far and it was the best noise…. he was still alive!

I quickly scooped him up, got some basic info, said thank you for calling, put him inside my jacket and started my way back to the car and that bottle of formula I had been keeping warm in my defrosters the whole drive.

Sherman was born very early that morning and was found when the farmer fed the animals breakfast. We knew he was around 8 hours old, but we didnt know if he had eaten anything before he was found.

Getting something into his stomach was the number one priority we got in the car and headed down the mountain. Once the snow started to lighten up, I found a safe place to pull over and gave sherman his first meal.

You may have seen adorable videos of goats drinking bottles. But when you are shoving this plastic contraption in a newborns face for the first time, it doesnt not always go smoothly.

Especially on the side of a mountain in your car. After being covered in formula that has now mixed with what you can expect to be on a newborn that was never cleaned, Sherman ate. Pulling over every few minutes to try get feed him more while also trying to contain a very active baby goat in a moving car, proved messy and adorable.

I thought I was very well prepared since I had previously done the same trip getting Chance. But Sherman sure liked to bounce around and cause trouble, even on day one.

I was eventually able to get him to eat more, calm down, and almost fall asleep.

Then I finally looked at myself. I would never make it back home to shower before work. The goat milk and placenta mixture that was covering me and my clothes would probably not be appropriate when working in a restaurant. So Jordan came to my rescue meeting me at her parents house in town with a brand new pair of clothes and to take our new baby home to give him his first big meal and tuck him in for the night.

I will never forget this day and think about it often as one of my favorite days i have i lived so far.