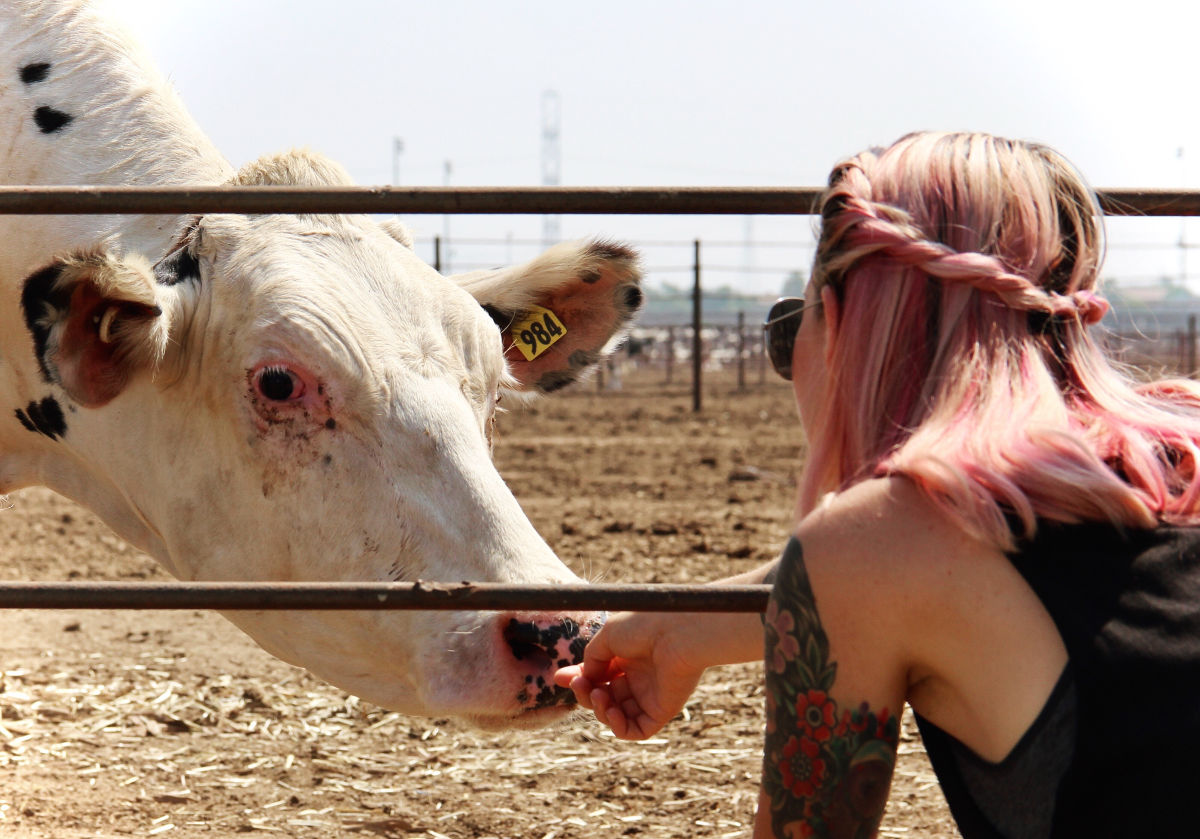 Tears filled my eyes as I scrolled passed pictures of dead dairy calves discarded in a dumpster—all for the sake of milk and cheese. I was finally allowing myself to acknowledge just how much they suffer, how many of their deaths are unaccounted. The world suddenly became a very dark place. It took me twenty five years to stop eating their flesh and nearly 26 years to witness their suffering through reading articles and watching videos. This is when I decided I would contribute to their suffering no more. I was horrified. You see, I had always been a huge advocate for the animals. Stray cats and dogs were attracted to us, my mother specifically. They’d find us everywhere we went. Gas stations, on the side of busy roads, in our neighborhood, and on our driveway. It’s like they knew they needed to find to find us. I would watch Animal Cops on Animal Planet obsessively with my best friend. We’d sit and plan how we were going to one day become cops ourselves, run a rescue, and put the animal abusers in jail. Then we’d go and eat the medium-rare steak my parents had prepared us for dinner.

I knew the animals that were raised and killed for food were suffering. I knew it. Sometimes I’d lay in bed and these images would flood my mind. I hadn’t any idea how they were actually killed or the conditions they were raised, but my imagination had no problem filling in the gaps. I’d fight so hard to keep these images out of my head. I allowed several “justifications” to push the images out of my mind until they existed no more. This is just how things were and there was nothing I could do about it.

Once I became Vegan, the animal rights activist inside of me re-activated. I felt compelled to do something. I didn’t have much of a community after the horrors of animal agriculture revealed itself to me, so I spent a lot of time studying these industries–trying to make sense of it all. I stumbled across The Save Movement (http://thesavemovement.org/) and Anonymous for the Voiceless (https://www.anonymousforthevoiceless.org/); videos of pigs on transport trucks broke me, but videos of people doing outreach replenished my broken heart. I joined group after group on facebook, trying to find my people. It didn’t seem like San Diego was too active. There were things going on, but nothing that really interested me. I wanted to participate in Anonymous for the Voiceless’ Cube of Truth, but couldn’t find anyone who had organized one yet.

My husband and I went to Brazil for a month to visit his family and when we got back, we hit the ground running. We visited our first animal sanctuary, went to our first cooking class at the library, and discovered in perfect timing the first meeting for San Diego’s Anonymous for the Voiceless chapter. Walking into that room, sitting amongst others who wanted to raise awareness for the animals filled my eyes with tears—I was completely moved. This is when I found my people. I didn’t realize at that point how involved I would get and how much I would grow in such a short amount of time. We started going to protest after protest, cube after cube, but it wasn’t until wear drove up to Los Angeles and bore witness with Los Angeles Animal Save that we solidified our involvement. Looking the victims in their eyes before they enter a slaughterhouse is something else. Once you see them seeing you, and then you watch them roll away beyond the slaughterhouse gate and there is absolutely nothing you can do about it—it changes you. It weakens you and strengthens you. You leave feeling broken, but with the empowerment to use your voice even louder for them. This is why I have been so committed to my evolvement in this movement and trying to encourage others to become more involved. If we don’t do something, who will?

Brianna Martelozzo is San Diego artist and activist.  Soon after starting her journey to a vegan lifestyle she became very active and is extremely passionate about animal rights.    She actively participates in the Save Movement, Anonymous for  the Voiceless, and was an Organizer and speaker at the San Diego Animal Rights March with Surge Activism.  She is a constant inspiration for all of us to get involved and be a voice for animals.  She went from going vegan to co organizing the largest animal rights march San Diego has seen in just a few years. To get involved or follow her mission….